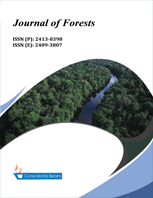 Diversity, Use Pattern and Management of Forest Resources in the Eastern Himalaya: A Case Study of Mizoram, India

This paper examines forests diversity, their use pattern and management in the Eastern Himalaya with a case study of Mizoram state. The Eastern Himalaya is one of the bio-diversity hotspots of the world where the forest diversity varies from the tropical rainforest to temperate and alpine types because of the altitudes. In the case study area i.e. Mizoram, forest types vary from tropical evergreen forests to montane and temperate with rich biodiversity. Forests are lifeline for livelihoods sustainability in Mizoram as it is the second largest source of income after agriculture. Total forestland is 90.68%. They are conserved by the community people and the state forest department. Even, the whole country received decrease in forestland; Mizoram has registered about 1.4% increase. A study on forest cover and changes in the eight sister states of the Eastern Himalaya during the last decades was carried out to penetrate the current status of forest. Data from the secondary sources were gathered largely from the Forest Survey of India (FSI) 1991, 2001 and 2011. Similarly, data from the Department of Environment and Forest, Government of Mizoram on forest diversity and their distribution were also collected. Further, wide range of discussion was made with the officials working in the forest department and with the local people to elaborate the other aspects of forest resources such as use pattern of forest products. Personal observations on forest diversity use pattern and management of forest resources in Aizawl district was also carried out.