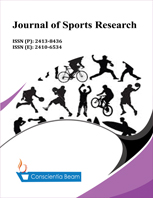 Separation of the shoulders and hips is an important contributor for rotational sports such as baseball and golf.  Most recent has utilized Motion Capture technology.  A new instrument has been developed as a tool to measure separation angle and can also be used to train the core musculature.  The primary aim of the current study was to examine the reliability of shoulder hip separation angle (SHSA), shoulder angular velocity (SAV), and hip angular velocity (HAV) as measured using the Turning Point Core Trainer (TP) during volleyball spiking actions. Voluntary participants included 14 collegiate, Division I, female volleyball players from the University of Utah, ranging from 18-30 years of age. Participants completed 10 volleyball spike actions will fastened to the TP.  SHSA was calculated at the height of the back swing. Participants were asked to provide maximal velocity during the forward phase thus providing SAV and HAV.  Analysis for reliability demonstrated high Cronbachâs alpha coefficients across the 10 SHSA, SAV, and HAV (a =.98; a =.91; a =.94), respectively, indicating excellent internal consistency reliability for the TP.  Follow-up research should examine whether or not training female outside hitters to increase SHSA at the top of the back swing, will increase SBV during either DL or DAC spikes. The TP measure of-axial rotation during spiking the internal consistency of the measures was high.

Contribution/ Originality
This study contributes to the existing literature regarding test re-test reliability using the Turning Point Core Trainer to assess torso rotation and the impact it has on sports performance.

( 1 ) Reliability of the Turning Point Core Trainer as a Measure of Shoulder Hip Separation Angle, Shoulder Angular Velocity, and Hip Angular Velocity During Volleyball Spiking Actions
( 4 ) A Comparative and Corelative Study On Body Composition and Motor Performance of 14 Years Old Boys of Four Different Altitudes of Darjeeling District
( 6 ) FMS Corrective Intervention Improves FMS Composite Score and 1-Mile Run Time, without Concurrent Change in Hip Extension Strength, Vertical Jump or T-Shuttle Run Time, in Recreational Runners
( 7 ) Developing a Scale to Measure a Football Players Transfer Score
( 9 ) The Biology of Senegalese Grasshopper (Oedaleus Senegalensis, Krauss, 1877) (Orthoptera: Acrididae)
( 10 ) Rheoencephalography: Past Popularity, Obvilion at Present and Optimistic Furure
( 11 ) Relationship between Reaction Time and Deception Type during Smash in Badminton
( 13 ) Critical Review: Antioxidant Properties and Antibiotic Mechanism of Honey against Infectious Diseases
( 14 ) Theoretical Preparation of Fencers at the Stage of Previous Basic Development
( 15 ) Effects of the Sport Education Model on University Students Game Performance and Content Knowledge in Basketball
( 16 ) Measuring The Relative Efficiency of Tournaments
( 17 ) A General Measure for the Relative Efficiency of Any Two Scoring Systems
( 18 ) Aspect of Mobbing Behaviors Incurred On the Staff Working At the Directorates of Youth Centers
( 19 ) Are Women as Competitive as Men in Road Races?
( 20 ) Identity in Australia: A Case Study on the Role of Sport in the Ego Identity Formation Process
( 21 ) The Effects of Imagery on Muscle Performance and Pain Perception Associated with Delayed-Onset Muscle Soreness
( 22 ) Early Signs of the Cardiovascular System in Athletes with Symptoms of Connective Tissue Dysplasia
( 23 ) Association between Physical Activity, General Health and Burden of Dementia Caregivers
( 24 ) The Factor Testing of Indicators of Physical and Functional Preparation of Basketball Players
( 26 ) The Effect of Nasal Breathing Versus Oral and Oronasal Breathing During Exercise: A Review
( 27 ) Histopathology Studies of Selected Organs of Hemichromis Fasciatus [1] Inhabiting Igun Gold Mining and Opa Reservoirs, South Western Nigeria: A Comparative Study