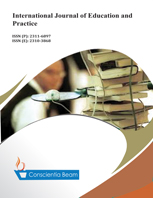 International Journal of Education and Practice

It is an interesting to obtain an objective view of studentsâ attitude toward a certain discipline and to construct effective pedagogical diagnostics based on the obtained data. Such data relates to both the academic performance of students and also their emotional attitude towards a subject and motivation to study it. This research study, using the semantic differential method, used a survey tool for measuring studentsâ attitudes towards âChemistryâ as a body of knowledge and practical use. A questionnaire was administered to first-year students from the University of EMERCOM of Russia, who were studying Chemistry as a basic discipline. Methods of graphical and factor analysis were used to process the data obtained during the study. The concurrent results of both methods prove the applicability of the graphical data processing method for small subject groupsâ analysis, when factor analysis was not sufficiently accurate. As a result of statistical data processing, four basic factors, reflecting the studentsâ attitude to the Chemistry course, were identified. The learners were seen having different attitudes depending on the major chosen, on gender and on the nature of the educational group. A lack of understanding of the role of Chemistry in professional disciplines was found to be a major cause for low learning motivation. It was also revealed that academic performance could be increased by monitoring the studentsâ emotional states. A combination of both factor analysis and graphical data processing made this study both qualitative and quantitative.

Contribution/ Originality
The primary contribution of this research is to investigate the pedagogical diagnostics method of studentsâ emotional perception in an educational process, based on the differential method, which allows tracking of the change in attitude towards a subject during training and choose teaching methods that increase motivation for learning.