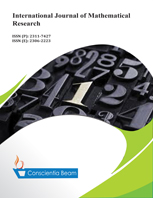 This study focuses in determining the trend and seasonality export performance of stem rose flower at Hawassa Green Wood based on five year monthly data. The data was obtained from secondary and primary source and includes from January 2006/7 to December 2010/11. Both descriptive and inferential Statistical methods of analysis are used to analyses the data. The analysis is done by using Minitab statistical soft ware. The methods of interests are trend analysis and Box-Jenkins SARIMA models. The trend for this data shows an increasing trend however seasonal fluctuation occurs. SARIMA (0, 1, 2) (0, 1, 1) are the selected Box-Jenkins potential model for this data and by using this model forecasted two years ahead.

This study shows the application of Stochastic Mathematical Model to Real Problems.

Floriculture or flower farming is a discipline of horticulture concerned with cultivation of flowering and ornamental plants for gardens and for florist, comprising the floral industry. Floriculture crops include bedding plants, flowering plants, foliage plants or house plants, cut cultivated greens, and cut flowers.

Ethiopia is now Africa’s second largest flower exporter after Kenya since Ethiopia's diversified agro-climatic conditions make suitable for year round production of a broad range of fruits, vegetables and flowers; there are 70 flower farms in Ethiopia, of which 45 percent are owned by local people and the remaining 55 percent by foreign investors. Among the local owned floricultures Hawassa green wood is popular in Southern region.

Hawassa green wood private limited company (plc) is one of the leading in its industry by exporting different crops, flowers and plants to its customers around the world. The company was established by Mr.Tadesse Belay in October, 1995, with its head quarter located in Hawassa (273 kms to the south of Addis Ababa) and the current (2011) price of one stem flower in this plc export data is$ 0.17.

1.1. Statement of the Problem

The problem of this plc floriculture is that the enterprise has no longer experience in this sector. It is not in the way of increasing production and market performance. This leads the country less competent in the world flower market. Other problems are the following

Our research project is filling the gaps when production must increase as the market demanded increases either locally or internationally and discovered other problems in open questions and to use as input in our finding.

The main objectives of this research project are applying some time series techniques to study the change in the flower export performance; and establish time series model.

1.4. Significance of the Study

The study assessed the problem of this sector and determines the best way to solve those problems, to be competitive in Ethiopia flower market as well as in the world. The rational that makes as to this study is that Ethiopia is following an agricultural lead industrialization the Government also gave a great attention towards this sector so it is believed that our study will solve as a major source of inspiration for other people to would like to conduct ride research or related area. Thus our study indicate directions and stimulates of others for further were.

People all over the world realize that flowers enhance the quality of life and influence human feeling more than words or other gifts. Globalization ,cultural exchanges and celebration enhancing fraternity such as a new  year ,valentine’s day, memorial day, mother’s day, father’s day ,Christmases, and weddings have induced people globally to use flowers as a means of sharing their feeling.

The Netherlands the world’s largest producer of cut flowers and foliage valued at $3.6 billion followed by Germany and Italy. Some countries are both producers as well as consumers. In Israel, Africa; and south and Central America countries, cut flowers have been a product produced mainly for export with no thought of a potential domestic market. If we take the case of Ethiopian it is only recently that the mere concept of flowers as gift emerged next to Kenya. Thus the domestic market is not yet matured, not withstanding Ethiopia has attracted several foreign investors in recent year, for exporting cut flowers to Ethiopian markets.

The European Market is by far the most important market for Ethiopian roses, cutting and other floriculture products. At the time of market entry by Ethiopia around the turn off millennium the European cut flower market is much more demand driven .The amount of Ethiopian exporting to the international market is low during 1996to 2000, Ethiopia export 436,196 kg of flower, amounting to about Birr 7,174, 405 [1

]. Currently Ethiopia by developing 70,000hectares of land for vegetables and fruits, as well as another 4,500 for flowers, we can anticipate a major increase in production.

There is a thriving flower industry in this country ;the climate ,cheap labor and production costs have to growers from many countries (manager of Ethiopian -Indian flower firm, Holita rose plc ).We grow nine type of flowers ,the country’s climate offers opportunity to grow both high altitude and low altitude flowers depending on your flavors Shinde saying. Fantaye Bifu said our export mainly comes from India and Kenya, but we are working to provide research programs at university levels so that we can have more local exports and super visors in the field [2

Ethiopian flower export is estimated to the year 2011 is 120 million .It has taken Ethiopia 5 years to achieve half of what we have in 3 decades, going by this rate Kenya could be over taken by Ethiopia in a decade. It is now estimated that Ethiopia flower exports good generate about$300 million in just another 2-3 years.(According to the head of the Ethiopia export promotion department ,Melaku legese).The rate of growth of flower industry in Ethiopia is incredible ,and the country is bound to rand among the biggest exporters in the world .For cut flower in the next decade or so ,due to their  ideal agro climatic conditions ,business friendly, environmental and government support . (Dubai flower center marketing director, Ibrahim Ali)

Ethiopia’s income from horticulture exports expected to more than triple $550million in five years due to rising investment, (the head of a powers association).Ethiopia may export 186million in flowers to Europe, Asia and the middle east this year [1

The source of the data for this study is based on the information obtained from secondary and primary sources. Any reliable and suitable written documents in Hawassa Green Wood flower production enterprises (floriculture) plc. Used to get this data a number of documents were reviewed and some open questions are interviewed. The data used for this research project consisting the variables of monthly export of flowers in stems from January 2006/7 to December 2010/11.

This test is described to test the systematic oscillation of the time series data depending on the peak and trough. A peak is a value greater than its two neighboring value and a trough is a value less than its two neighboring values. A simple test (turning point test) is given by count the number of peaks and troughs. In order to carry out the test we must determine the distribution of the turning points in random series.

Let p be the number of turning point define counting variable for a set of observation.

Where n is total number of observation of the data and the distribution of p tends to be normal with mean E(p) and variance var (p) with test statistic:

ARIMA models are the general class of models for forecasting a time series, which can be stationery by transformation, differencing and lagging

Â Mathematically it can be written as:

Forecasting the future values an observed time series is an important task in time series analysis in many areas.
Box-Jenkins forecasting

Forecasting the future values an observed time series is an important task in time series analysis in many areas.

A forecasting is obtained by taking expectation at original t of the model written at time T+k.

the series data seems to be fluctuating more rapidly than expected for an iid sequence. This indicates that the data is time series data, implies that it is possible to apply time series analysis on this data.

Figure-1. Plot of the original data Stems vs Months 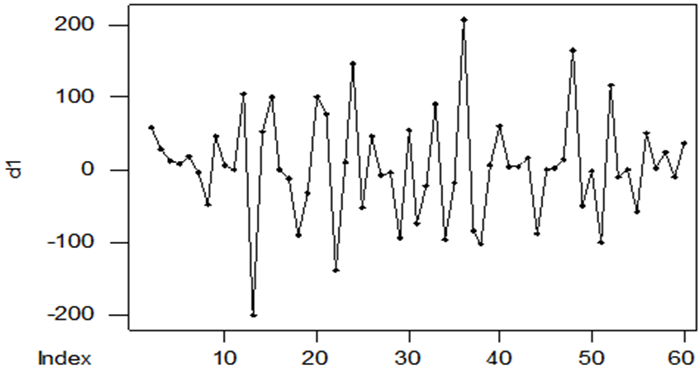 Both ACF and PACF are the same one significance lags

To select the most potential model from the two, it is necessary to consider, MSE

Test of significant for the SARIMA parameters

Therefore, the last potential model is has no autoregressive part and constant term and followed seasonal difference are:

The SARIMA (0, 1, 2) (0, 1, 1) model is best forecast since it consider the seasonal expected changes, but the quadratic trend model does not consider the expected changes of the series. Therefore for this data we cannot use the quadratic trend model for forecasting rather we use the SARIMA (0, 1, 2) (0, 1, 1) which is the selected best model as we have seen before.

Depending on the outcomes the following conclusions are drawn:

Based on the result of the study and overview open questions the Government must supportedÂ  impute materials such as chemicals, fertilizers, special seeds, local and international market linkages.