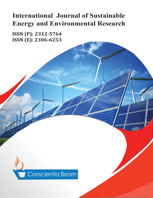 On Generation of Renewable Energy from Road Traffic

This paper investigates the possibility of generating green power from day to day road traffic. This source of green energy is obtained from the proposed systems that harness the wasted energy such as the kinetic and vibrated energy from everyday traffic. These include two proposed systems that were designed and implemented using the MATLAB-Simulink platform. In the first proposed system, the renewable energy is generated using compressed air which is suitable for developing countries and the second proposed system is designed such way to another system to deduce electricity by harvesting the kinetic and vibration energy. The second proposed system is suitable for a developed country based on the implementation expenditures. The system was designed considering all the factors that involved producing a realist outcome. These factors include the load factor, heat loss, power loss, frictional losses and the switching losses that dwell into the field of fluid mechanics, power electronics and element analysis. The system performance was also determined by considering the nature and characteristic properties of the materials, motors and generators used; and the usage time of the system. As a result, incorporating the necessary factors involved in the system designing, the power generated under traffic rate condition at peak and off peak hours for each system was estimated. The obtained results proved that substantial amount of power are generated during peak traffic hours using the two proposed methods.


Contribution/ Originality
This paper contributes to the very first logical analysis of obtaining power production in kWhr for various case studies. The analysis performed takes into consideration the load factor, speed of travel and impact of stress and strain of the vehicles on the energy harvesters along with its energy penetration level.