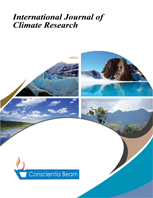 The study examined farmersâ vulnerability, perception and adaptation to climate change in Kwara State. Data were collected with the aid of structured questionnaire to elicit information from 120 food crop farmers selected through a multistage random sampling technique. Data were analyzed using descriptive statistics, fuzzy set approach and multinomial logit model. Results show that majority of the sampled farmers were in their productive age with about 26.6% had no formal education and were predominantly small scale farmers. The study revealed that majority (84%) of the farmers believed that temperature had increased while about 65.8% noticed that precipitation had declined. The farm household vulnerability assessment showed that the average multidimensional vulnerability indices for male and female farmers are 17.5% and 27.8%, respectively, while the average vulnerability index for all the farming households is 18.4%, implying that the intensity of vulnerability to climate change is higher in female farmers and that the whole sampled population is less than 50% vulnerability threshold. The econometric investigation revealed that education of household head, farming experience, land ownership, rainfall and temperature were the most relevant and significant factors that determined the farmersâ choice of adaptation strategies to climate change in the study area. The major barriers to adaptation include lack of information on adaptation methods, land tenure problem and inaccessibility to credit.


Contribution/ Originality
The study contributes to the existing literature on climate change adaptations by taking into consideration the vulnerable poor farming households. The study adopted two methodologies to overcome the weakness of other studies. Gender attributes and their vulnerability intensity were investigated. The primary contribution is to guide strategy for future adaptations.