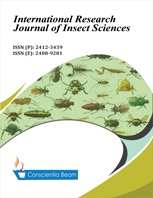 This paper reviews the current status of Turkish silkworm genetic resources and activities being undertaken for their conservation. Silk production and the trade in silk have been important activities in Turkey, which lies on the ancient Silk Road, for many hundreds of years. Current production of silk is on the rise after a period of very low production. Turkey has a well-established programme of conservation and development of all of its domestic animal genetic resources, of which silkworm is considered a constituent part. Three distinct lines of native silkworm have been registered with the national standards body, the Turkish standards Institute. Distribution of silkworm germplasm is regulated by the Ministry of Food, Agriculture and Livestock through Cooperative Unions which have more than 10,000 members. Renewed and increased international dem and for natural and biological products is favourable to Turkey's silkworm industry. The prognosis for the future development of silk production is strongly positive.

This study documents how silkworms have been kept in Turkey to produce silk as a value-added product for hundreds of years. They add diversity to household and national production. Three lines are being bred and conserved by Government institutions.

Silk, produced naturally by the larva of the silkworm moth (Bombyx mori L. 1758; Lepidoptera, Bombycidae), accounts for only 0.2 per cent of world textile output but is produced in more than 60 countries across the world [1] and is an important contributor to household economies and to the income of women in many of these. China, Japan, Korea and India are the main producing countries although Japan and Korea have been reducing their supply whilst maintaining high dem and . At a conference hosted by the Food and Agriculture Organization of the United Nations held in thailand in 2002 purporting to review the silkworm genetic resources of the world only those four Asian countries and France, Italy and Bulgaria in Europe were covered [2] although many other countries, including Turkey, are known to have an array of silkworm genetic resources [1].

Silk has been produced and traded commercially in what is now the Republic of Turkey for many centuries. The Chinese traded silk - perfumes, jewellery, leather goods, spices and slaves - with the Hun Turks and began the history of what is now universally known as the Silk Road [3]. Many wars ensued over the years along the 10,000 km route as Chinese, Turks, Indians, Persians, Romans and Arabs sought to control it [4, 5]. The Selcuks built caravanserai along the Anatolian part of the Road at intervals of 30-40 km (7-8 hours of travel by camel) to facilitate trade [3]. The Byzantine Emperor Justinian sent two Nestorian monks to China as early as A.D. 552 to learn about sericulture and the production of silkworms and silk. Having learnt the technology they returned with eggs hidden inside bamboo canes [3, 6, 7]. Sericulture then became an important sector of the economy in the early Ottoman Empire along with wheat, grapes, opium and Angora hair [8]. Bursa in northwestern Anatolia -- the first Ottoman capital - was not only the most important city in Turkey for sericulture but was also a major transit point for the silk trade between Iran and Europe [9]. In addition to the Bursa area the provinces of Erzincan, Tokat, Diyarbakir and Amasya in Anatolia (Figure 1) and Aleppo in what is now Syria were and continue to be important production centres [10-13]. Although silk continues to be produced on a small commercial scale in five main areas in Turkey, silkworms are raised by as many as 40 per cent of primary school children as a hobby, along with ladybirds (Coccinellidae) and grasshoppers (Orthoptera) [14]. 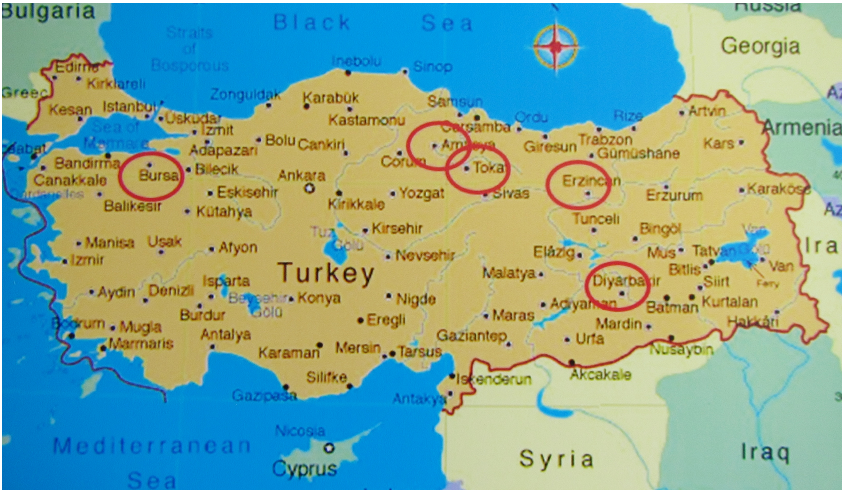 (Source: base map from www.maps.com)

This paper is one of a series on the domestic livestock of Turkey. It describes the local varieties of Bombyx mori and the measures being taken to develop and conserve them.

Economic problems in Turkey in the 1920s, and especially in 1929, resulted in reduced prices. The situation deteriorated further in the 1930s as artificial fabrics were imported, mainly from East Asia. In the 1940s, Government tried to revive and support the silk industry by importing polyhybrid eggs that were to be used in place of the native monohybrid. In the 1970s and 1980s the fresh cocoon trade received further government support in attempts to develop local sericulture [9]. Turkey produced about 2000 tonnes of cocoons in the 1980s, falling to 130 tonnes in the 1990s while domestic dem and was about 400 tonnes [1]. In the year 2000 production fell to 60 tonnes, with a further fall to 47 tonnes in 2001 before some recovery to around an annual average of 150 tonnes took place through 2005 [15].

Three silkworm lines have been registered by the Turkish standards Institution [16, 17] under Notice No 2004/39 published in the Official Gazette ('Resmi Gazete') Number 25668 of 12 December 2004. The native lines are Bursa White ('Bursa Beyazi', Figure 2), Bursa Piebald White ('Bursa Beyazi Alaca', Figure 3) and Hatay Yellow ('Hatay Sarisi', Figure 4). These lines have some common traits and some that differ (Table 1). The random Amplified Polymorphic DNA (RAPD) technique was used to study genetic variation with 68 per cent of b and s investigated by polymerase chain reaction (PCR). The highest ratio of polymorphic locus was 55.9 per cent in Hatay Yellow: 44.1 per cent was shown in both Bursa White and Bursa Piebald. Nei's genetic distance for Bursa White-Bursa Piebald was 0.0637, for Bursa White-Hatay Yellow was 0102 and for Bursa Piebald White-Hatay Yellow was 0.0793 [18].

Table-1. Some characteristics of three silkworm lines being conserved in Turkey

Silkworm eggs were imported in limited quantities from Japan in 2002 and 2003 [15]. It is also reported that Turkey maintains 23 silkworm accessions and 15 mulberry tree accessions [19].

During the period of the Ottoman Empire initiatives to promote and protect sericulture were made periodically and with varying success in the seventeenth to nineteenth centuries. Sericulture was given greater prominence, however, following the establishment of the Public Debts Institution in 1881 because it was able to contribute considerable revenue to the national treasury [20, 21]. An early piece of legislation in support of sericulture enacted by the Republic of Turkey Government after the overthrow of the Ottoman state was Act Number 859 "On the production, inspection and sale of silkworms and eggs" [22]. Under this law (which was the first relating to agriculture passed by the Turkish Government on 26 May 1926) was to define the procedure of silkworm activities in Turkey. The Ministry of Agriculture became the sole agency for producing, selling, distributing and inspecting the silk value chain: imports could only be made by the Ministry when deemed necessary, mulberry gardens would be established in locations defined by the Ministry and the Ministry was to construct sample workshops and an inspection laboratory in suitable locations. Cooperative unions were established in 1940 in Bursa, Bilecik and Adapazari to protect and increase cocoon production. These cooperatives were unified on 11 May 1940 as the Bursa Association of Agricultural Sales Cooperatives for Silk Cocoons (abbreviated as KOZABIRLIK). The Silkworm Egg and Cocoon Management Union was established in 1963 in order to produced silkworm eggs [23].

A conservation project for Turkey's domestic animal resources was initiated by the General Directorate of Agricultural Research and Policy in 1995. The primary objective was the characterization and conservation of breeds at risk. Cattle were the only species included at the start of the project in 1995 but the programme was broadened in 1996 and 1997 to include sheep, goat, buffalo, domestic fowl and silkworm in 1996 and 1997: bees were included in 2002. A second animal genetic resources project entitled "In vitro Conservation and Preliminary Molecular Identification of Some Turkish Domesticated Animal Genetic Resources - I" was set up in 2007 and concluded at the end of 2011 although silkworms were not included in this project [17, 24].

Conservation and development activities continue at Bursa Provincial Directorate of Agriculture [24, 25]. Sericulture is supported by a system whereby government subsidizes prices paid by the Bursa Association of Agricultural Sales Cooperatives for Silk Cocoons (KOZABIRLIK; the only formal producer organization in the country with 10,881 members in five smaller cooperatives). Producer prices and subsidies vary via a grading system comprising Breeding, Grades 1 to 3 and Ungraded. Subsidies have provided a large part of producer income in recent years [15, 26, 27].

Law No 5996 of December 2010 "The Veterinary Services, Phytosanitary, Food and Feed Law" puts in place the powers to license food production establishments in technical and hygienic terms and to establish an efficient audit and control system [28, 29]. In addition, however, two regulations introduced under this law cover conservation and promotion of domestic animal resources: these are Conservation of Animal Genetic Resources and Animal Breed Registration. These regulations establish two formal bodies, being the "National Consultative Committee on Conservation of Animal Genetic Resources" and the "Animal Breed Registration Committee" [17]: it can be expected that these two committees will continue to monitor existing and future domestic animal diversity as their m and ates include identifying objectives and policies on conservation, on sustainable use, on characterization and on import and export operations.

Silk production and trade have long been important activities in the Middle East and Central Asia and have been linked with the Silk Road for hundreds of years. Varying support has been provided by the governments of the greater region for these activities but the diversity of the silkworm and it value to the economy has long been a hostage to fortune. The advent of cheaper man-made fibres and silk substitutes rendered the position of sericulture and its associated activities of spinning and weaving somewhat precarious. Production was reduced and there was undoubtedly considerable loss of valuable silkworm genetic resources as a result. Most countries, nonetheless, maintained stocks of native lines and there was trade and exchange in these. Turkey, although a relatively small producer, has contributed to this genetic diversity and both informal and formal exchanges or transfers have taken place. One formal example is that of Italy which imported four lines from Turkey in 1995 [30]. Italy also imported silkworm eggs from Turkey in 1998, 1999 and 2002 [15].

Attitudes to the use of man-made fibres have been changing and there is increasing dem and within "developed" countries for natural and biological products of which silk is an example. The economic standards of European populations (at least outside the period of recession in the second half of the decade of the 2000s) also encouraged the use of such products in spite of higher prices.

The Near East and Central Asia regions and Turkey in particular (especially with the long term likelihood of membership of the European Union and already favourable terms of access to the EU market) are well placed geographically to supply this market. The creation of the Black, Caspian Seas and Central Asia Silk Association in 2005 [31] was partly in response to this horizon with one of its main objectives being the production, maintenance and transfer of sericultural germplasm and silkworm eggs.

Turkey has already taken positive steps to identify, maintain and improve its silkworm genetic resources. Its commitment to all its domestic animal resources is adequately demonstrated through its various research stations and projects. The prognosis for its silkworm resources can thus only be favourable.