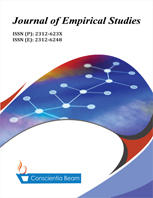 This paper analyses the effect of the prime interest rate as a monetary policy instrument to stimulate economic growth in Namibia, a small open economy that is constrained by currency board operations. A Vector Autoregressive Model (VAR) was used for the period 1980â2019. The result shows that Namibiaâs prime interest rate has no significant effect on economic growth. This finding remains robust and consistent when impulse response function and variance decomposition are employed. The impulse response function indicates a shock on the prime interest rate exhibits an inverse relationship. However, this effect is insignificant in both short and long-run scenarios. The variance decomposition indicates that the prime interest rate has a strongly exogenous impact, implying it has a weak influence on GDP growth. Policy implication indicates that small open economies under currency board operations need to identify different policy responses to circumvent external shocks and addresses their development needs.

Contribution/ Originality
This study contributes to existing literature by analysing the effect of the prime interest rate as a monetary policy instrument to stimulate economic growth in Namibia.