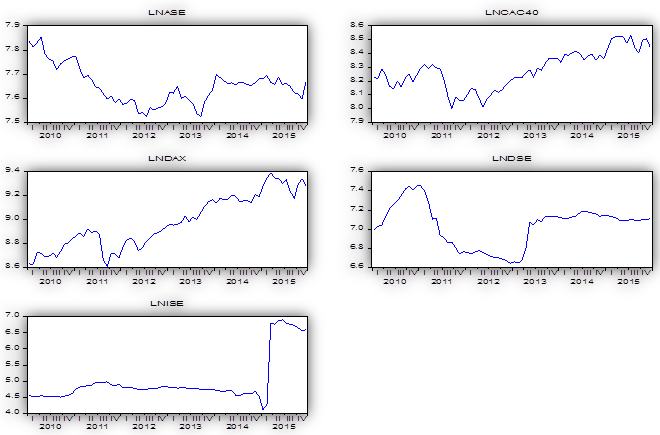 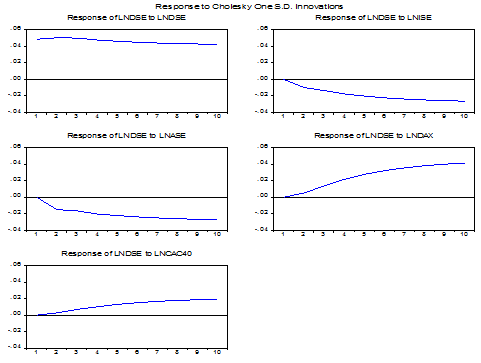 Bushra Ali , Oubay Mahmoud , Yousef Mahmoud (2016). Studying the Integration of Damascus Securities Exchange with Selected Stock Markets. International Journal of Business, Economics and Management, 3(7): 85-102. DOI: 10.18488/journal.62/2016.3.7/62.7.85.102
This study aims to examine the integration of Damascus Securities Exchange (DSE) with some Arab and international financial markets, which are (Jordan, Iraq, Germany, and France). The study used monthly data of each stock market index during the period 2010-2015. To achieve the objectives of the study, five tests are used. Namely, Unit Root Test, Johansen Cointegration Test, Vector Error Model, Vector Autoregressive Models (Impulse Response Function and Variance Decomposition) and finally Granger Causality. The findings show a long-run relationship between DSE and other studied markets. Consequently, markets move together in a long-term. No evidence is found about short-term relationship. In addition, DSE seems to respond slowly to changes in the other markets; as a result, shocks on these markets do not explain the variation on DSE index. Finally, Granger Causality test reveals absence of causality among these markets. Thus, investors can benefit from diversifying their portfolios in short-term, but not in the long-term.


Contribution/ Originality
This paper is the first research examines the integration of Damascus Securities Exchange with the Arab and international markets during the period 2010-2015. In addition, it is considering the impact of the Syrian crisis on the relationship between Damascus market and other markets