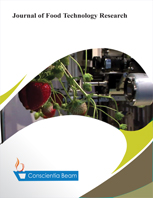 PDF Download  Access Available XML PubMed
No any video found for this article.
Hadia Saleem , Masood Sadiq Butt , Aamir Shehzad , Saira Tanweer (2014). Flaxseed Nutritied Meat Balls With High Antioxidant Potential. Journal of Food Technology Research, 1(1): 84-95. DOI: 10.18488/journal.58/2014.1.1/58.1.84.95
In the present era, nutraceutical foods have become a dietary inclination among consumers due to its health enhancing properties. Flaxseed is an important source of lignans which are phenolic compounds, linked to numerous health boosting effects against various life threatening ailments. To prevent different lifestyle disorders some antioxidant enriched foods must be included in our diet. To fulfill this requirement flaxseed enriched meat balls were prepared. Flaxseed bioactive moiety was obtained by using (3%) conventional solvent extraction system (T1) and with its comparison with (T2) supercritically extracted lignans (0.1%).  Flaxseed fortified meat balls were analyzed for its physicochemical and the sensory evaluation. After properly frying the fortified balls color was investigated by CIELAB color system. The maximum L*and a* value was observed in supercritical extracted nutrified meat balls however, b*, chroma and hue angle was observed maximum in conventional solvent extracted enriched meat balls. The T2 balls also have better texture and maximum antioxidant activity among all the treatments. In the case of sensory attributes color and over all acceptability was maximum in T2 whist T1 was best in texture however taste was more appreciated in control treatment.

PDF Download  Access Available XML PubMed
No any video found for this article.
Awatif I. Ismail , Shaker M. Arafat (2014). Quality Characteristics of High-Oleic Sunflower Oil Extracted from Some Hybrids Cultivated Under Egyptian Conditions. Journal of Food Technology Research, 1(1): 73-83. DOI: 10.18488/journal.58/2014.1.1/58.1.73.83
This work was conducted to study the oil content, quality criteria of different seven sunflower hybrids growing under local environmental condition. Three high-oleic hybrids (2031, 2033 and Olivico), two mid-oleic hybrids (A12 AND A15) and two traditional hybrids (120 and 53) were studied to determine the oil content, physico-chemical properties, total tocopherol, oxidative stability by Rancimat method at 100ÂºC and fatty acid composition by GC during2012-2013.According to the results, the hybrids 2033, 2031 and A15 produced higher oil content (44.00%, 43.30% and 38.79% respectively, than other hybrids under study. Hybrids 2033, Olivico and 2031 had higher tocopherol content (445, 423, 419ppm) than other hybrids. In contrast, significant differences were noticed in oxidative stability and fatty acid composition. The hybrids 2033, Olivico and 2031 showed the higher oxidative stability (19.00, 17.50 and 17.00 hr) and oleic acid (82.87%, 82.11% and 81.40%) respectively. In conclusion, results indicated that the high-oleic and mid- oleic sunflower hybrids cultivated under Egyptian conditions gave higher quality oil.

PDF Download  Access Available XML PubMed
No any video found for this article.
Ali Aberoumand (2014). Nutritional Properties of Some Novel Selected Fish Species in Khuzestan Province, Iran. Journal of Food Technology Research, 1(1): 52-59. DOI: 10.18488/journal.58/2014.1.1/58.1.52.59
The proximate biochemical contents of some fish species i. e. Thunnus alalunga, Evynnis japonica, Caulerpa lentillifera, Orcynopsis unicolor and Euthynnus affinis were analyzed. Protein contents was determined in T. alalunga (22 %), E. japonica (13.02%), C.lentillifera (26.9%), O. unicolor (22%) and in E. affinis (24%) respectively. Fat content was recorded as 23.3%, 0.24%, 15%, 16% and 14% respectively in the five species of fish. The ash content was highest in C. lentillifera (8.8%). The present findings revealed that the highest protein content was recorded as in C.lentillifera (26.9%), but the fat was highest in T. alalunga (23.3%). The overall nutrient contents of studied medium indigenous fishes were observed as higher or equal to those of larger fish species.

PDF Download  Access Available XML PubMed
No any video found for this article.
Adesokan Isaac Ayanniran (2014). Preservative Activity of Ethanolic Extract of Ginger in Wara - A West African Traditional Soft (Unripened) Cheese. Journal of Food Technology Research, 1(1): 45-51. DOI: 10.18488/journal.58/2014.1.1/58.1.45.51
The effect of ethanolic extract of ginger (Zingiber officinale) on sensory and storage qualities of wara was evaluated. Pasteurized fresh milk samples were used to prepare wara and; 1.6%, 2.4%, 3.2% and 0% ginger extracts (samples A, B, C and D respectively) were incorporated into the samples separately. The wara samples were then fried in hot palm oil as it is done traditionally and organoleptic properties of the samples were determined by a taste panelist. Also physico-chemical and microbiological changes during six (6) days storage at ambient tropical temperature (30 Â± 2oC) were determined. The samples (A, B and C) containing ginger were rated better than the control sample (D). Sample C had the highest overall acceptability of 4.0 while sample D had the least (2.8). During storage a significant decrease (P≤0.05) in pH with a corresponding increase in titratable acidity (TA) was recorded for the wara samples. The pH ranged between 4.17 and 6.55 while the TA ranged between 0.018 and 0.099 (mg/100g).The peroxide values (POV) of sample D increased at a faster rate than samples A, B and C. The POV for sample D after 3 days of storage was 34.15 meq/kg while that of sample C was 25.33 meq/kg at the end of 6 days storage. Although there was general increase in the microbial loads (MLs) of all the samples, the MLs of samples A, B and C were significantly lower than that of sample D. Moreover samples A and B got spoilt by day 4 of storage; sample D by day 3 while sample C was still in good condition at the end of 6 days storage. This study therefore showed that incorporation of 3.2% ethanolic ginger extract significantly improved acceptability of wara and increased the shelf life of the product by 3 days.

PDF Download  Access Available XML PubMed
No any video found for this article.
Anam Ansari , Ali Aghar , Muhammad Shahid , Saira Tanweer (2014). Use of Solar Drier Papapya Lather as a Fat Replacer in Cakes. Journal of Food Technology Research, 1(1): 27-44. DOI: 10.18488/journal.58/2014.1.1/58.1.27.44
Fat is a major constituent of food that softens the food product in addition to provide energy. High fat foods are energy dense foods that produce obesity and also some other major disorders. To reduce the risk of disease fat replacers can be used. Weight conscious people are adopting these fat replacers very quickly. There are three different types of fat replacers i.e. carbohydrate based, protein based and fat based. Solar dried papaya lather is an excellent source of fat replacers.  This fat replacer can be used in baked especially for cakes products instead of shortening and oil. Papaya lather has the same functions as of fats. It has numerous theraputical perspectives and can be used in different drugs preparation. Papaya is a rich source of papain that acts as meat tenderizer. Papaya fruit has rich contents of antioxidant activity hence important to be used in diet owing to different health benefits.

PDF Download  Access Available XML PubMed
No any video found for this article.
Shatabdi Goon (2014). Dietary Inclusion of Palm Oil in Bangladeshi Dietensures Better Nutrition with Minimal Cost: An Overview. Journal of Food Technology Research, 1(1): 21-26. DOI: 10.18488/journal.58/2014.1.1/58.1.21.26
The paper outlines the situation, consumption and importation of fats and oils in Bangladesh considering its latest trend of marketing with palm oil covered by health and economic issue. Recommended dietary intake of fats and oils are missing from Bangladeshi diet having poor knowledge regarding its importance and low purchasing ability. In this regards, Palm oil being the cheapest commodity vegetable oil and also the cheapest oil to produce and refine, can be an important component of the increasing intake of oils and fats in the developing world like Bangladesh. Compared with other imported edible oils, Palm oil having better nutrition value and low cholesterol as well as  price and import cost has gained much attention by Bangladeshi government in recent years. The active presence of different suppliers of palm oil, direct interactions between suppliers and local importers and refiners can uplift the present situation of oils and fats consumption aiming popularity for palm oil in Bangladesh.

Monte Carlo Modeling for Aflatoxin B1 Distribution in Pistachio Samples: A Prerequisite for Sampling Plan Validation

Monte Carlo Modeling for Aflatoxin B1 Distribution in Pistachio Samples: A Prerequisite for Sampling Plan Validation

PDF Download  Access Available XML PubMed
No any video found for this article.
Nathalie Wesolek , Alain-Claude Roudot (2014). Monte Carlo Modeling for Aflatoxin B1 Distribution in Pistachio Samples: A Prerequisite for Sampling Plan Validation. Journal of Food Technology Research, 1(1): 1-20. DOI: 10.18488/journal.58/2014.1.1/58.1.1.20
AFB1 is the main aflatoxin found in pistachios, and as it is dangerous for health, the European Union (EU) has set a maximum level at 8 Âµg/kg in pistachios in 10 kg samples. Given that efficient sampling plans must be used in order to determine this contaminant level accurately, a mathematical validation of sampling plans has to be achieved with to Operating Characteristics curves. However, a prerequisite before drawing these curves is to assess the contaminant distribution within the food lot as well as to determine the variability between samples taken from the food lot. This is difficult to achieve for AFB1 in pistachios, as the contamination incidence rate is low, and concentrations differ greatly between food items. More precisely, the contaminant is heterogeneously distributed. Contrarily to current contaminant distribution assessment methods used on a regulatory basis and which are based directly on variability between samples, the method developed relied first on variability between individual pistachios, before computing the variability between samples, thus triggering more reliable results. This work assessed the distribution and incidence of aflatoxin in pistachio nuts, thanks to a Monte Carlo simulation, with pistachios split into categories, which were early split sound kernel, cracked sound kernel, and mouldy pistachios. A 30 kg sample size of Iranian pistachios for export to Europe was considered. Differences between good and bad lots were taken into account with lots split into 3 classes for mean contamination levels in export packages. Simulation results were in good accordance with observed contamination levels in Iran.