The Economics and Finance Letters

Effect of Institutional Factors on Foreign Direct Investment in Nigeria

Effect of Institutional Factors on Foreign Direct Investment in Nigeria 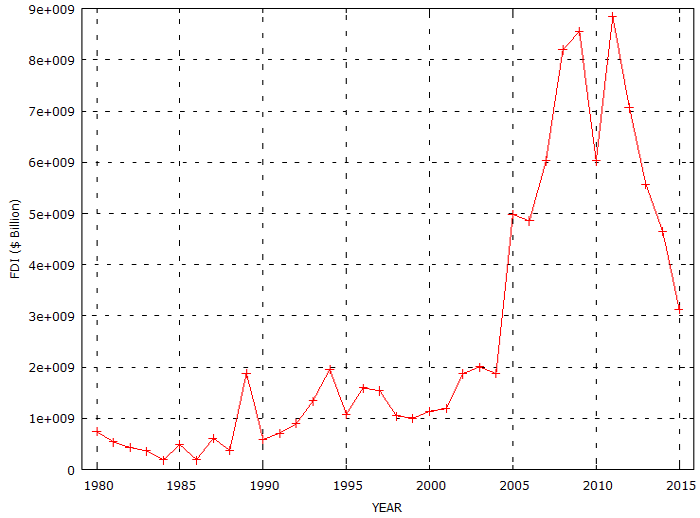 Ewubare Dennis Brown , Ekwe Ernest Ibekwe (2018). Effect of Institutional Factors on Foreign Direct Investment in Nigeria. The Economics and Finance Letters, 5(1): 12-27. DOI: 10.18488/journal.29.2018.51.12.27
The study investigates the effect of economic, political and social institutions on FDI in Nigeria between 1980 and 2015. The Stock-Watson Dynamic Least Squares (DOLS) is relied upon for analyzing the data extracted from the World Bank WDI. The KPSS stationarity results indicate that all the variables were mixed integrated with FDI and political integration being levels stationary while economic and social factors were first difference stationary. The Johansen cointegration test finds evidence of two cointegrating equations in the model, indicating that long run relationship exists among the variables. The estimated cointegrating regression model showed that economic and social integrations were highly significant in explaining changes in FDI. Political institution factors, on the other hand, have an insignificant positive relationship with FDI. The Wald test showed evidence to support that the coefficients of the regressors were significantly different from zero. The result of the Granger causality test reveals that political and social institution has high predictive power for FDI flows to the Nigerian economy. Based on the findings, this study recommends that Nigeria should adopt a gradual reduction in all economic, political and social constraint to FDI inflows to optimize the benefits of foreign direct investment in Nigeria.

The Effect of Work-Life Balance on Accounting Ethics

The Effect of Work-Life Balance on Accounting Ethics

No any video found for this article.
Cem Berk , Fatih Gundogmus (2018). The Effect of Work-Life Balance on Accounting Ethics. The Economics and Finance Letters, 5(1): 1-11. DOI: 10.18488/journal.29.2018.51.1.11
Accounting professionals work in a stressful environment where their social life might have effect on work performance and unethical behavior. For this study, a survey is conducted for members of Istanbul Chamber of Certified Accountants, Turkey. The number of respondents is 491. The methodology used in the research is a multiple regression. The research questions are whether there is an effect of work-life balance on ethical behavior at work and if the work life balance and accounting ethics differentiate based on demographic factors for the respondents. The main objectives of the research are to test the relationship, and analyze four different independent variables of work life balance to find out whether they contribute to accounting ethics. Other objectives of the research are testing the differentiation of work life balance and accounting ethics based on gender, age, education and marital status. The main hypothesis is that there is a relationship between accounting ethics and work life balance. Based on the results, the main hypothesis is statistically accepted.

Contribution/ Originality
There are many studies that explain ethical behavior but this study is unique to combine work-life balance and accounting ethics by a survey applied to Istanbul Chamber of Certified Accountants. This creates many practical opportunities to rethink the way accountants are employed. The availability of differentiation analysis also helps to focus some potentially problematic cases and take proactive decisions.