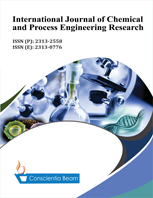 No any video found for this article.
Jia Jun Poon , Mei Ching Tan , Chin Hong Geow (2020). Effects of Osmotic Dehydrated and Ultrasound Pre-Treated Orange Peel on Dye Removal. International Journal of Chemical and Process Engineering Research, 7(1): 1-11. DOI: 10.18488/journal.65.2020.71.1.11
In this study, the adsorption performance of orange peel with osmotic dehydration (OD) and ultrasound (US) were studied. The efficiency of the osmotic dehydration pre-treated orange peel at different sucrose concentration (20 â 60 Â°Brix) in dye adsorption with several conditions of initial dye concentration (20 â 60 mg/L) and dosage (0.05 â 0.15g) was studied and compared with untreated adsorbent. The optimum concentration of the hypertonic solution was 20 Â°Brix (OD-20) which gave the higher adsorption efficiency compared with the control and other concentration of hypertonic solution. The adsorption efficiency of OD-20+US pre-treated orange peel on 20 mg/L dye concentration with 150 mg of dosage was 6.14% and 19.32% higher than OD-20 and untreated orange peel respectively. Furthermore, OD-20+US also increases the desorption efficiency by 5.81% and 13.37% when compared with OD-20 and untreated orange peel respectively. With OD-20, the number of active pore availability increases due removal of moisture content by sucrose particles and US able to create microscopic channels in porous materials to enhance the moisture removal and captures of dye ions.

Contribution/ Originality
The paper's primary contribution is finding that combination of ultrasound and osmotic dehydration treatments has positive impact on the preparation of adsorbent. It is able to generate the adsorbent with high adsorption capacity and reusability by introducing the treatments.