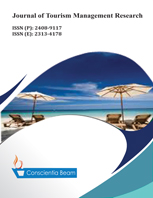 Evaluating the Effects of Temporal Distance on Tourists Decision-Making Processes

Evaluating the Effects of Temporal Distance on Tourists Decision-Making Processes

No any video found for this article.
Ashioya Belinda , Imbaya Beatrice , Timothy Sulo (2021). Evaluating the Effects of Temporal Distance on Tourists Decision-Making Processes. Journal of Tourism Management Research, 8(2): 117-126. DOI: 10.18488/journal.31.2021.82.117.126
Kenyaâs tourism continues to rely heavily on wildlife. Of the approximately 922,000 annual international arrivals during the peak season between June and October, nearly 738,000 head for the Maasai Mara National Game Reserve to witness the seventh wonder of the world, the annual wildebeest migration. Several studies have been conducted based on construal level theory to establish the effect of temporal distance using various factors that determine travel decisions. However, to date, no study has been carried out to establish the effect of temporal distance on destination choice decision-making. As tourism consumption involves making a purchase decision now for a future point in time, this study evaluated the effects of temporal distance on the destination choice decision-making based on the construal level theory framework. The study adopted the survey approach based on a confirmatory research design. Using a sample of 144 drawn from a population of 230 tourists, data was collected and analyzed using correlation, ANOVA, and regression methods. The findings revealed that temporal distance has a positive and significant effect on decision-making regarding destination choice based on levels of construal measured through R=0.324; R2=0.105; ? = 0.295; t= 3.024 > +2; F=9.145; and p=0.003<0.05. The study revealed that temporal distance has a significant effect on the decision process of choosing a destination. In conclusion, therefore, marketing communications targeted at tourists should be intensified well in advance of the season envisioned for traveling to increase the desirability of the destination and thus, influence more tourists to choose the destination. The study also contributes valuably to the literature on touristsâ destination choosing decisions based on temporal distance in the construal level theory framework.

Contribution/ Originality
The study contributes to the existing literature on touristsâ choice of a destination by taking into consideration the effect of temporal distance by adopting the Construal Level Theory (CLT), which has not yet been adopted in service industries such as tourism. And more so in a developing country like Kenya.

The Antecedent of Intention to Visit Halal Tourism Areas Using the Theory of Planned Behavior: The Moderating Effect of Religiosity

The Antecedent of Intention to Visit Halal Tourism Areas Using the Theory of Planned Behavior: The Moderating Effect of Religiosity

No any video found for this article.
Julina . , Aisah Asnawi , Pardomuan Robinson Sihombing (2021). The Antecedent of Intention to Visit Halal Tourism Areas Using the Theory of Planned Behavior: The Moderating Effect of Religiosity. Journal of Tourism Management Research, 8(2): 127-135. DOI: 10.18488/journal.31.2021.82.127.135
Halal tourism has a significant current market share. The increasing number of tourists from Muslim countries is a consideration for many areas to change their marketing strategies. In various works of literature, religiosity plays a role in consumer behavior. In this study, religiosity becomes a mediating variable from the subjective norm, attitude, and perceived behavioral control (PBC) to the intention to visit a halal tourism area. This study modifies the Theory of Planned Behavior (TPB), intending to understand how intense religiosity affects touristsâ decisions to visit a halal tourism area. The number of respondents in this study amounted to 590 people. Questionnaires were distributed via Google forms to tourists in Indonesia and analyzed through Moderated Regression Analysis to test the moderating effect of the religiosity variable. This research shows new information related to the religiosity variable. TPB can predict the intention to visit a halal tourism area. Subjective norms and attitudes have a positive and significant impact, while PBC has a positive but insignificant impact on intention. Still, religiosity does not play a role in strengthening the three exogenous variables that can affect the intention to visit a halal tourism area. The insignificant impact of religiosity in moderating the three independent variables may be because, in Muslim-majority countries, domestic tourists do not have to consider the halal aspect of a halal tourism area. Halal restaurants and places of worship are relatively easy to find, especially in provinces that are known for having a religious presence.

Contribution/ Originality
This study contributes to the development of the TPB model by adding the religiosity variable as a moderator to measure the intention to visit a halal tourism area. Currently, the trend towards halal tourism is being promoted, so this study provides a view from the viewpoint of community religiosity.