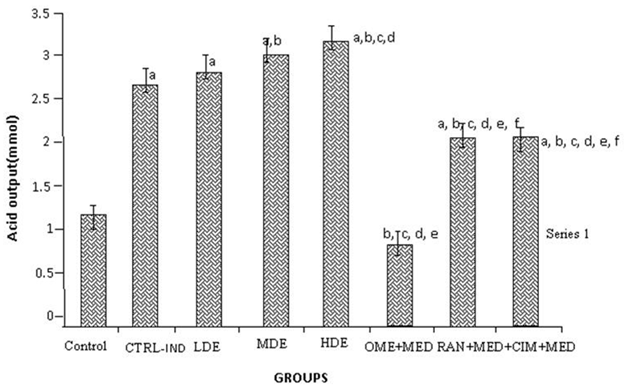 Umoh. IU , Jimmy EO , Inyang, P.S. (2019). Cola Nitida (Kola-Nut) Enhances Gastric Ulceration and Secretion Via Ileum Motility Increase. Journal of Diseases, 6(1): 13-22. DOI: 10.18488/journal.99.2019.61.13.22
Ileum motility, gastric ulceration and secretion were studied in thirty albino rats in the administration of the ethanolic extract of cola nut. The acute toxicity study in 27 mice showed the LD50 of 1118.03mg/kg established through 100% mortality in group with 5000mg/kg and 0% mortality with 1000mg/kg. Three orthodox drugs for ulcer treatment: cimetidine ranitidine and omeprazole were used in the study to compare motility, gastric ulceration and secretion with cola-nut. The motility of the ileum expressed as basal height of contraction was significantly higher (P <0.05) in groups administered with low, medium and high dosages of the extract compared with control groups using distilled water and atropine. However, there was a significant decrease ((P <0.05) in the ileum motility in the group administered with medium dose, extract of omeprazole than in cimetidine and ranitidine. Motility was significantly (P <0.05) higher in groups administrated with the extract plus ranitidine and cimetidine than groups administered with the medium extract dose and omeprazole. Gastric acid output was increased in the group administered with a high dose of the extract of cola nut and was significant (P <0.05) among the groups. Gastric ulceration was significantly higher (P <0.05) in the groups administered with the extract than in the omeprazole, cimetidine and ranitidine control groups. It is concluded that cola nut is very ulcerogenic i.e. it can lead to ulcer in its consumption and should be avoided particularly in gastric ulcer patients.

Contribution/ Originality
This study has added to existing literature in ileum motility. The study uses a modified method used in the study. A new approach was originated by the use of kola nut. The investigation is new Logical analysis; ileum motility enhancement by kola nut. It offers a primary contribution on the positives and negatives of kola nut consumption. It documents the roles of kola nut in GIT.

Gender Based Differences in Epidemiologic and Clinical Profile of Adult Vitiligo

Gender Based Differences in Epidemiologic and Clinical Profile of Adult Vitiligo

Ehiaghe L Anaba (2019). Gender Based Differences in Epidemiologic and Clinical Profile of Adult Vitiligo. Journal of Diseases, 6(1): 7-12. DOI: 10.18488/journal.99.2019.61.7.12
Vitiligo, an asymptomatic de-pigmenting skin disease occurs in both males and females. It is not readily known if differences in clinical and socio-demographic features exist between male and female vitiligo patients. To document gender based differences in socio-demographic (age at onset, area of onset, family history of vitiligo) and clinical characteristics (type of vitiligo, severity of disease, activity of lesions, area affected) of adult Nigerian vitiligo patients. This was a retrospective cross-sectional study of 76 adult vitiligo patients who attended the Dermatology Outpatient Clinic of the University College Hospital, Ibadan from January 2005 to December 2009. A questionnaire designed for the study was used to document the relevant information. Data was analyzed using SPSS version 16. Prevalence of vitiligo was 4.5%, 44 males (57.9%) and 32 females (42.1%) were seen. Mean age at onset was 34.6 Â±17.1 years with a range of 1-78 years. The face and scalp were the commonest areas of vitiligo occurrence in both genders. There were differences in clinical characteristics however, they were not statistically significant. Significate difference was found in level of education, self-medication and duration of disease. There are some differences in clinical profile between male and female adult vitiligo patients.

Contribution/ Originality
This study contributes to the existing literature on vitiligo in adults. Vitiligo occurs in both adult males and females. However, differences in clinical and epidemiologic features of vitiligo between males and females is not readily documented. This study highlights these differences.

Contribution/ Originality
This study contributes in the existing literature of the medical importance of Hibiscus sabdariffa calyx with emphasis on the relevance of this extract in medical laboratory practice.