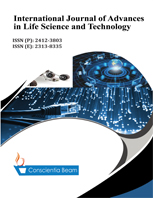 International Journal of Advances in Life Science and Technology

PDF Download  Access Available XML PubMed
No any video found for this article.
Boudra Abdellatif , Hamdi Mohamed , Amara Karim , Bouknine Asma (2014). Radiography Monitoring of Osteoconduction and Osteoinduction of Orthotopic Allograft Autoclaved Covered With Propolis. International Journal of Advances in Life Science and Technology, 1(1): 25-31. DOI:
The veterinarian orthopedic surgeon is often faced to the loss of bone substance in diaphyseal region of long bones. Our study is based on a biological approach to the filling of segmental bone loss by implanting an autoclaved orthotopic allograft of one centimeter length covered and uncovered with propolis in the femoral diaphysis under general anesthesia and sterile condition.  The experiment involved eight adult dogs, from local breed and different sex; split into two groups. An autoclaved allograft without propolis was implanted for the first animals group (control group ) then the same graft  has been implanted to the second animals group. The aim of our study is to determine the osteoinductive and osteoconductive allograft covered with propolis, to follow clinically and radiologically the incorporation of the autoclaved graft.The results showed that the use of a graft covered with propolis accelerated the osteoinductive and osteoconductive process, this is reflected by an early passage of the callus .
The use of a thin layer of propolis on a autoclaved allograft, stimulated peripheral and spinal osteoinduction, and accelerated osseointegration at both proximal and distal interfaces, this phenomenon can be controlled depending on the amount used of propolis on the graft.


Contribution/ Originality
This study is one of very few studies which has investigated the both phenomena osteoinduction and the osteconduction of autoclaved allograft and we have used in our study the extract propolis as purchased from France in vivo and highlight its advantages too.

PDF Download  Access Available XML PubMed
No any video found for this article.
G.C.C. Ndinwa , M. Peretomode , T. Asiagbe (2014). Distribution of Trace Metals in Vertebrate and Invertebrate Species from Ubeji Creek, Southern Nigeria. International Journal of Advances in Life Science and Technology, 1(1): 16-24. DOI:
Trace metals content in water, fishes (Tilapia mariae, Clarias gariepinus), earthworm (Libydrius violaceous) and sediment were determined from Ubeji River using Atomic Absorption Spectrophotometer (AAS). Metals determined were lead, cadmium, zinc, mercury, arsenic, copper and Iron. The results obtained revealed that all the metals were detected. Also, there were variations in metal levels in the samples. Highest Zn level was obtained in all the samples analysed (0.284ppm and 0.284ppm in water, 24.0mg/kg in Clarias gariepinus, 28.8mg/kg in Tilapia mariae, 1.16mg/kg in earthworm and 0.64mg/kg in sediment). The concentrations of trace metals obtained in this study are found to be dangerous. The metal levels in water from Ubeji River are higher than the WHO/FEPA standards for water quality. The concentrations of lead, zinc and copper obtained in the whole body of fishes exceeded the WHO/FEPA set standards for aquatic life. The presence of trace metals found in the sample from Ubeji River is attributed to the proximity of petroleum activity, construction works and other allied companies.

Contribution/ Originality
This study contributes to the existing knowledge of trace metals in the aquatic ecosystem. It helps resource managers to identify the pollution problems in freshwater bodies and also measure accurately the health status of the water body.

PDF Download  Access Available XML PubMed
No any video found for this article.
Abdelmanan E. H. Elamin , Abdalla M. Abdalla , Ahmed M. El Naim (2014). The Biology of Senegalese Grasshopper (Oedaleus Senegalensis, Krauss, 1877) (Orthoptera: Acrididae). International Journal of Advances in Life Science and Technology, 1(1): 6-15. DOI:
The Senegalese grasshopper, Oedaleus senegalensis  (Orthoptera: Acrididae) is known as pest of economic importance which cause damage to millet and sorghum crops besides pastures in western Sudan. The study was done to investigate the biology of the insect on its natural habitat. Observations in the field were made twice/ week, from April-November each year for three continuous seasons 2006/2007, 2007/2008 and 2008/2009, in two selected sites one around Gellabiya village in North Kordofan State west Elobeid town. The other was around Kuik village in South Kordofan State north Kadugli town. The nymphs and the adults were collected by sweep net from the field and transferred to the laboratory for study. Female adults of the Senegalese grasshopper were dissected and examined under binocular Microscope (Paralux, Optigue de prÃ©cision CE 0602397) to investigate the fecundity through ovarioles numbers and function.  Duration of each of the developmental stages of the pest was determined. Results showed that the mean number of ovarioles is 36 / ovary and two egg pods were laid /female. The mean fecundity was 44 eggs. The female laid eggs twice during life cycle. Ovariole function average was 76% in the first laying and 36% in the second laying. Mean developmental duration after hatching of O. senegalensis to adult (nymphal instars) was 25 day. The respective nymphal duration from the 1st to the 5th instar was 4, 5, 5, 5, and 6 days, respectively.