Agric Financing and its Impact on Agricultural GDP: An ARDL Approach

Agric Financing and its Impact on Agricultural GDP: An ARDL Approach 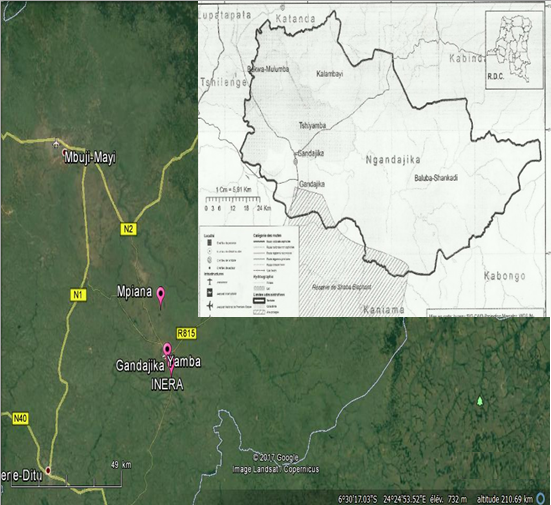 Remy Tshibingu Mukendi , Antoine Lubobo Kayenga , Louis Longanza Baboy , David Mugisho Bugeme , Adrien Mbuyi Kalonji , Theodore Mushambanyi Munyuli (2019). Genotype-Environment Interactions and Yield Stability of Cowpea (Vigna Unguiculata L. Walp) in Lomami Province, Central Part of Democratic Republic of Congo. International Journal of Sustainable Agricultural Research, 6(1): 33-46. DOI: 10.18488/journal.70.2019.61.33.46
The genotype environment interaction (GEI) has always been considered as an important issue by researchers involved in varietal selection and yield performance assessment. The objective of this study was to identify stable genotypes of cowpea in the Greater Kasai region. The current study was undertaken in 3 locations in the Ngandajika territory of Lomami Province (central part of Democratic Republic of Congo (DRC) with 12 improved cowpea genotypes obtained from the National Institute for Agricultural Research and Studies. The experiments were conducted following the randomized block design with 3 replicates and 12 treatments. Analysis of variance (ANOVA) and AMMI model were applied to identify main effects and GEI. The genotype yield stability across different locations was determined using the stability value of AMMI (ASV) rank of the AMMI model. ANOVA test indicated that there was performance inconsistencies in the yield of the 12 genotypes tried across the environments retained in this study. However, AMMI model revealed genotypes with stable yields across the different environment considered in the study. For the determination of the specificity of adaptability of genotypes to specific environments, the stability value of AMMI and diagram plot techniques were used for the discrimination of the genotypes versus the different environments considered. The genotypes Mujilanga (V2), CNGKASA7-2-M (V3) and CNGKASC2-1-1-T (V9) were identified as the most stable across different environments studied. Their yields were significantly higher (P<0.05) since they oscillated between 260 and 369 kg / ha as compared to the overall average of 312 kg / ha.

Contribution/ Originality
This study is one of very few studies which have investigated yield stability and adaptability of cowpea genotype in central part of DR Congo. The paperâs primary contribution is finding that stability value of AMMI (ASV) rank and diagram plot discriminated three cowpea genotypes for dissemination in central part of DR Congo.

Contextual Estimation of Marketable and Marketed Surplus of Selected Seasonal Fruits: A Study Based on Chittagong Hill Tracts (CHT) of Bangladesh

Contextual Estimation of Marketable and Marketed Surplus of Selected Seasonal Fruits: A Study Based on Chittagong Hill Tracts (CHT) of Bangladesh

Md Jahurul Islam (2019). Contextual Estimation of Marketable and Marketed Surplus of Selected Seasonal Fruits: A Study Based on Chittagong Hill Tracts (CHT) of Bangladesh. International Journal of Sustainable Agricultural Research, 6(1): 21-32. DOI: 10.18488/journal.70.2019.61.21.32
This study is an attempt to assess the marketable and marketed surplus of selected seasonal fruits (mango, jackfruit, and litchi) in the Chittagong hill tracts of Bangladesh. Primary data were used for the study. In total, 459 sample fruit growers were selected purposively for the study. Proportionate random sampling was followed in case of selecting the sampling unit. It was apparent to interpret from the survey that in case of mango production, 78% fruit grower planted Rangui variety whereas Amrapali was ranked second highest (36%) including the eight groups of Bandarban and Rangamati of the survey. Among the three mentioned varieties of litchi, BARI litchi 2 variety was more prevalent (21%) than the other varieties. Also 69% respondent grew jackfruit whereas the average production was more in Rangamati than in Bandarban area. It is more apparent for all three of the seasonal fruits that, the marketable surplus was found to be higher than the net marketed surplus. That means farmer retains more for their consumption and other uses than the actual amount marketed. Running factor analysis, several cases were found that affect sustainable market linkage which was categorized into four factors like marketing, economic, social and environmental factor and the KMO value was found to be 0.527, generally, indicate that a factor analysis might be useful with this data. This study recommends increasing the marketed surplus with the increase of marketable surplus so that it can ultimately help fruit grower to link themselves with the market and increase their revenue.

Contribution/ Originality
The study is one of very few studies which assess the marketable and marketed surplus of seasonal fruits in the hilly areas of Bangladesh. Since most of the studies deal with the production and marketing system of crops, this study adds the momentum in linking the hill farmer with the market.

Azanaw Abebe , Merkuz Abera (2019). Pepper Disease Assessment and Identification in Major Growing Districts of West Gojam Zone in Northwestern Ethiopia. International Journal of Sustainable Agricultural Research, 6(1): 8-20. DOI: 10.18488/journal.70.2019.61.8.20
Hot pepper (Capsicum annuum) is an economically and traditionally an important crop in Ethiopia. It is also necessary vegetable crop mainly for small-scale farmers in Amhara National Regional State of Ethiopia. The productivity of this crop is low under national level, it is said to be 7.36qt per hectare. It is even lower to that of the national in Amhara National Regional State growing areas. Assessing pepper growing areas and collect damaged plants by the disease and identification of diseases was the focus of this study. Three districts were selected purposively based on accessibility, production and problem, available time, logistics, and representativeness. In each district three representative peasant administrations (PAs)/kebeles were selected. Sampled kebeles and respondents were selected using simple random sampling techniques. A total of 135 respondents were selected for interview. The data was collected through semi structured interview schedule. In each PA, three simple random sample selected farmersâ fields were assessed. The assessment was done at one growth stage of the plant (flowering-podding stage). The collected data was analyzed using descriptive statistics. The findings of this study confirm that in all the surveyed peasant farms, only one type of variety, which is Marekofana was encountered with low to high levels infestation of different leaf, stem, and root diseases. Root rot/wilt complex diseases were found distributed in almost all the surveyed areas. The prevalence of the disease, pepper wilt/root rot complex is high, therefore; efforts better to be made towards the integration of multiple control options.

Akinwalere B.O , Okunlola J.O (2019). Roles of Extension Services in Adoption of Agroforestry Practices among Farmers in South West Nigeria. International Journal of Sustainable Agricultural Research, 6(1): 1-7. DOI: 10.18488/journal.70.2019.61.1.7
The study examined the roles of extension in the adoption of agroforestry practices in South west Nigeria, with a view to providing data on the practices of agroforestry in the area. It highlighted the extent of agroforestry, the ownership and management of agroforestry practices, the utilization and sustainability of the practices, as well as the challenges faced by farmers practicing agroforestry. Multi-stage sampling technique was used to select 200 agroforestry farmers. A large proportion (82%) of the respondents are married and the mean age was 52years. Majority (81.5%) of them had formal education while 92% are involved in farming as their primary occupation. 39.5% of the respondents are involved in the practice of shelter belt and wind breaks, 35% are involved in improved fallow, 24% in Taungya, 22% in fuel wood production, 16% in the practice of Alley cropping, 10% in Tree on range land, while 7% and 2.5% are into home garden and apiculture respectively. About half (54.5%) of respondents had no contact with extension services, access to extension service in the study area as rated by farmers is an indication of low extension agent to farmer ratio. The result of Pearson moment correlation coefficient showed that there was no significant relationship between extension contacts and sustainable adoption of agroforestry practices (r = 0.12, p = 0.07).

Contribution/ Originality
The study examined the roles of extension services in the adoption and utilization of agroforestry practices by farmers. It discussed the various agroforestry practices available, the acceptability and perception of the farmers. The study also revealed the lack of proper extension services needed for successful implementation of any adoption process.