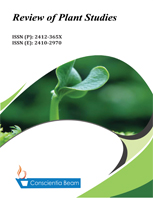 PDF Download  Access Available XML PubMed
No any video found for this article.
Sawsan Sabry Moawad (2014). Review: Plant Resistance to Agriculture Insect Pests. Review of Plant Studies, 1(1): 10-25. DOI: 10.18488/journal.69/2014.1.1/69.1.10.25
Competition and interaction among organisms in nature results to selection for traits which confer added advantage. As a result of such interactions between plants and their natural enemies, plants have developed defensive mechanisms, both chemical and physical, to minimize pest damage.
Intensive researches were carried out to identify and isolation the gene responsible for resistance plant to insectsâ infestation which is used in breeding programs for crops improvement. It can be summarized as follows:
1-  Corn ear worm, Helicoverpa zea (Boddie) canât cause damage to certain corn strain due to maysin, a C-glycosyl flavone, and related compounds in the silks that inhibit corn earworm larval growth. Scientist can identify corn chromosome regions associated with silk maysin concentration, and then used it in producing new hybrid.
2- Other insect such as the fall army worm, Spodoptera frugiperda canât cause damage to resistance corn due to some factors as high hemicelluloses content, low protein content and leaf toughness. They can also identify a gene code which is controlled by the resistance traits of corn to the fall army worm.
3- However, the European corn borer, Ostrinia nubilalis (Hubner) canât cause damage to certain corn varieties due to high concentrations of 2,4-dihydroxy-7- methoxy-1,4-benzoxazin-3-one (DIMBOA) in the leaves of mid-whorl stage plants. Scientist indicated that resistance to the European corn borer was identified in Peruvian corn germplasm and the GEM (Germplasm Enhancement of Maize) corn collection, then make backcross to produce new resistance strain.
4- Other crops as tomato infested by Tuta absoluta  (Meyrick ( but some tomato varieties as Lycopersicon esculentum can resist it due to antixenosis factor which interrupted tomato leaf miner from feed, oviposition and shelter .
5- Russian wheat aphid, Diuraphis noxia (Mordvilko), canât cause damage to some wheat and barley and others crop due to antibiosis and antixenosis factors. Six sources of resistant wheat, each governed by a different, single gene, have been identified.
6- Two-spotted spider mites, Tetranychus urticae (Acari: Tetranychidae) and Whiteflies, Bemisia tabaci (Hemiptera: Aleyrodidae) are herbivorous pests. Additional whitefly infestation to spider-mite infested plants resulted in a reduced attraction of predatory mites (Phytoseiulus persimilis). This interference was shown to result from the reduction in (E)-β-ocimene emission from plantsinfested by both spider mites and whiteflies.
7- Transgenic crops expressing a protein from the bacterium Bacillus thuringiensis Berliner (Bt) were carried out into potato, maize, cotton and soybean to be reduced their insect infestation.


Contribution/ Originality
This study contributes in the existing literature which interested to study factors of plant resistance to agriculture insect pests and itsâ role to improve new plant strains.

PDF Download  Access Available XML PubMed
No any video found for this article.
(2014). Ethnomedicinal Survey of Plants Used In Treating Sexually Transmitted Diseases in Abia State, Nigeria. Review of Plant Studies, 1(1): 1-9. DOI: 10.18488/journal.69/2014.1.1/69.1.1.9
The prevalence of sexually transmitted diseases in Nigeria is still high. In this study, an ethno medicinal survey was conducted to record the different plant families, species and plants parts used for the treatment of sexually transmitted diseases in Abia State of Nigeria. The result revealed that a total of 62 plant species in 48 genera from 44 families mostly the Euphorbiaceae, Fabaceae, Asteraceae, Rutaceae, and Malvaceae were used to treat diseases such as gonorrhoea, syphilis, trichonomiasis, chlamydia, urethritis, and to suppress the replication of HIV. The most plant parts used were leaves (32.5%), stem bark (23.75%) and root (20%). Other parts used included the fruits (7.5%), the seeds (3.75%) and the aerial parts (12.5%). More research is needed to extract and isolate the active chemical compounds under sound hygienic condition and study their mode of function.