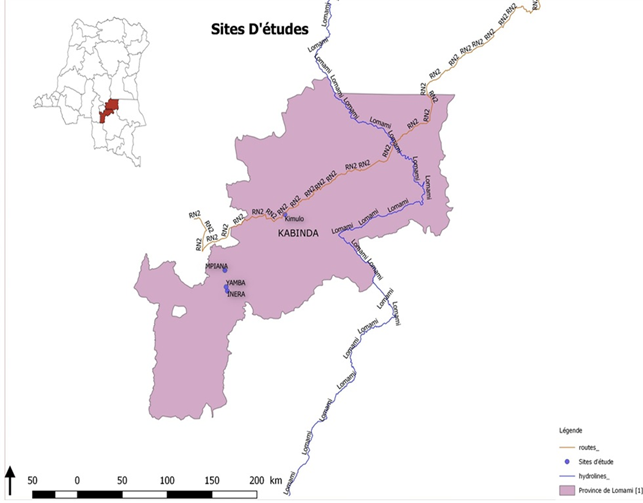 Remy Tshibingu Mukendi , Antoine Lubobo Kanyenga , Louis Longanza Baboy , David Mugisho Bugeme , Adrien Mbuyi Kalonji , Theodore Mushambanyi Munyuli (2019). Insecticide Spraying Regime to Control Insect Pest of Cowpea: Management and Monitored Application of Cypermethrin in Lomami Province, DR Congo. Current Research in Agricultural Sciences, 6(1): 37-53. DOI: 10.18488/journal.68.2019.61.37.53
Cowpea is one of the most important grain legumes growing in Lomami province, DR Congo. Despite the high potential for production in this region, insect pests are the main problems of cowpea producers. They most often belong to the following categories: pod borers (Maruca vitrata), pod-sucking bug (PSB) complex of which Riptortus dentipes and Apium varium. A study was conducted to evaluate the efficacy of three spray regimes of Cypermethrin on the density of M. vitrata, A. varium and R. dentipes and the performance of yield components of cowpea. Trials were conducted at three different sites, one controlled (INERA) and two peasant sites (Mpiana and Yamba). Three genetically improved varieties called Mujilanga, CNGKASC2-1-1-T, and CNGKASA7-2-M of cowpea were used. The tests were conducted using a split-plot device with three repetitions. Results demonstrate that Cypermethrin is effective against insect pests of cowpea, the population of all target pest were found to decrease in the plot treated to the untreated plot. Application of insecticide three times recorded the highest increased grain yield between 93 and 169 %. The average yield for spray regime recorded 689.1 kg, 651.8 kg and 553.3 kg for D1, D2 and D3 sprays. Famers can use two or three spray regimes of Cypermethrin to manage the pest, this option may reduce the cost, in order to achieve a sustainable level of agricultural and a high level of environmental and human health protection in cowpea field in DR Congo.

Contribution/ Originality
This study is one of the very few studies which have investigated the chemical spraying regime to a cowpea insect pest in the field in the central part of DR Congo. The results finding that insect pest were below the economic threshold and grain yield is highly significant with the tree or two sprayings of Cypermethrin.

Effect of Blended Fertilizer and Lime Application on Yield of Finger Millet, and Soil Properties of Acidic Soils in Western Ethiopia

Effect of Blended Fertilizer and Lime Application on Yield of Finger Millet, and Soil Properties of Acidic Soils in Western Ethiopia 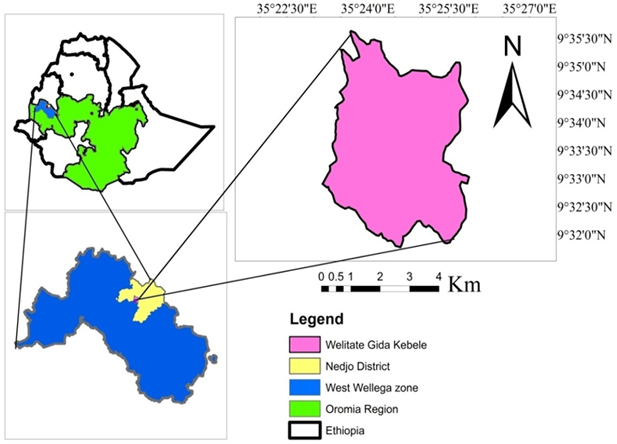 Fekadu Mosissa , Geremew Taye (2019). Effect of Blended Fertilizer and Lime Application on Yield of Finger Millet, and Soil Properties of Acidic Soils in Western Ethiopia. Current Research in Agricultural Sciences, 6(1): 29-36. DOI: 10.18488/journal.68.2019.61.29.36
Finger millet (Eleusine coracana L.) is a small seeded cereal grown in low rainfall areas of Ethiopia. It is tolerant of drought. Nutritionally, the grains are a good source of quality protein and various minerals. However, production of finger millet is constrained by poor soil fertility and low input production systems. An experiment was carried out to evaluate the effect of different fertility management on yield of finger millet and soil physicochemical properties under limed and unlimed conditions of acidic soils in western Ethiopia. The treatments comprised of NP and different formula blended fertilizers under limed and unlimed conditions were laid in a randomized complete block design with three replicates. The result revealed that amelioration of soil acidity and application of N and P nutrients are a key intervention that should be sought in the study area. K, S, Zn and B are not limiting nutrients for the production of finger millet in the study area.

Contribution/ Originality
This paper serves as the most recent study on the use of blend fertilizer in acid prone highlands of Ethiopia in giving sight whether it has a comparative advantage or not than the recommended N and P fertilizer.

Yenibehit, N. , Murshed, M. , Islam, M. J. (2019). Assessment of Technical Efficiency of Layer Production in Mampong Municipality: Stochastic Frontier Approach. Current Research in Agricultural Sciences, 6(1): 20-28. DOI: 10.18488/journal.68.2019.61.20.28
This study used a Cobb-Douglas functional form of the stochastic production model to assess the technical efficiency of layer producers under commercial production system in the Mampong Municipality of Ghana. The study captures thirty (30) randomly selected layer poultry farms within the Asante Mampong enclave for the study. This study utilized the Maximum Likelihood Estimation (MLE) criteria to obtain farm specific technical efficiencies as well as their determinants of output and inefficiency. The study revealed that output was positively correlated to the number of birds, medication and quantity of water which all have significant coefficients at 5% and 10% levels of significance. The significant estimated gamma value of 0.99 implied that 99% of the total variation in layer output in the study area is due to the technical inefficiency. The study also showed that age, education, experience, extension contact, credit and type of poultry housing were related to socioeconomic characteristics influencing technical inefficiency. It is recommended for egg producers to observe the proper routine medication and add other supplementary drugs to boost the laying performance of their birds while intensifying stock size and increasing water usage to maximize production and close up the production gap. Poultry policies should consider motivating and increasing extension contact between extension agents and poultry farmers in the study area.

Contribution/ Originality
The paper's primary contribution is finding that it captures thirty randomly selected layer poultry farms within the Asante Mampong enclave for the study by utilizing the Maximum Likelihood Estimation (MLE) criteria to obtain farm specific technical efficiencies as well as their determinants of output and inefficiency in the context of this municipality of Ghana. 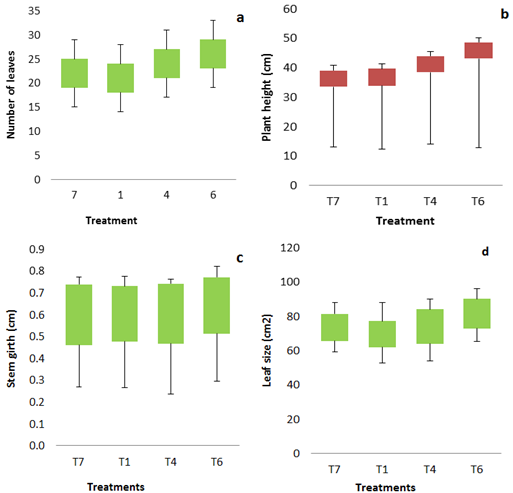 Samuel Fru Billa , Ajebesone Francis Ngome , Tata Precillia Ngome , Tsi Evaristus Angwafo (2019). Influence of Biochar and Poultry Manure on Weed Infestation and Growth of Arabica Coffee (Coffea Arabica) Seedlings. Current Research in Agricultural Sciences, 6(1): 9-19. DOI: 10.18488/journal.68.2019.61.9.19
Young coffee plants at nursery particularly after transplanting are very sensitive to weed infestation. Therefore, timely weeding is necessary to boost seedling vegetative growth. A pot experiment was conducted from 2017-18 at IRAD, Foumbot multipurpose research station, Cameroon. The main objective was to assess the influence of biochar and poultry manure on weed infestation and growth of arabica coffee seedlings. The biochar was produced using an Elsa pyrolysis barrel at 450 0C with 58 min carbonisation time from corncobs. The biochar were milled to < 2mm and mixed at the rate of 20, 30 and 40t/ha-1 with 40t/ha-1 poultry manure and soil before applying to 0.01 m2 polythene bags with five replications. Results showed that the 20t/ha-1 biochar + 40t/ha-1 poultry manure treatment significantly (P < 0.05) increased plant height, stem girth, number of leaves, and leaf area compared to control (poultry manure only). Treatments with 30t/ha-1 and 40t/ha-1 biochar had the lowest weed fresh weight and dry weight. Cyperus rotundus, Oxalis cornoculata and Cynodon nlemfuensis were most economically important weeds scored for their abundance and persistence. Overall, weed control efficiency was lowest in sole 40t/ha-1 poultry manure and 20t/ha-1 biochar treatment with 18% and 20% compared to 40t/ha-1 and 30t/ha-1 biochar treatment with 35% and 24% respectively. The results demonstrated that combined application of poultry manure and biochar appears essential for a sustainable coffee seedling production in the Western Highlands of Cameroon. However, to enhance coffee seedling growth using biochar, the use of recommended doses is paramount.

Contribution/ Originality
This study contributes to existing literature that biochar; a product of pyrolysis contains some important plant nutrients and properties which can significantly affect soil fertility and crop growth. It further seeks to assess how the growth of arabica coffee seedlings is affected by different types of organic fertilizers.

Akinwalere B.O. , Uche G.C. (2019). Effects of Community Financing Institutions on Cassava Farmers Income in Oyo State, Nigeria. Current Research in Agricultural Sciences, 6(1): 1-8. DOI: 10.18488/journal.68.2019.61.1.8
The study examined the effect of community financing institutions on cassava farmersâ income in Oyo State. The objectives were to examine the socio-economic characteristics of the respondents in the study area, identify governmental & non-governmental community financing institutions in the study area, and examine the effect of the financial institution programme on respondentsâ income and to identify the factors affecting the accessibility of credit facilities among small holder farmers in Oyo State. A Multi-stage sampling technique was used for this study. In the first stage, a purposive sampling was used to select Lagelu, Akinyele and Ido Local Government Areas in Ibadan. Random sampling was used to select three communities from each of the three Local Government Areas and from each community, 10 respondents were selected randomly to give a total of 90 respondents of cassava farmers and processors. The analysis of the socio-economic characteristics revealed that majority of respondents that were involved in the cassava production and processing activities in the study area were males, the ages ranged between 17- about 65years and majority (38.9%) were between the ages 49-56years with the mean age of 49 years. Most (96.7%) were married with a high household size of between 6-10 numbers. The level of education of respondents revealed that majority (43.3%) had one form of education or the other which could enhance performance in production and processing activities. The primary occupation of respondents reveals that all of them were farmers, some are artisans and their monthly allowance ranged between less than ?20,000.00 and ?75,000.00 as most of them earn less than ?30,000.00. Chi square showed that there is a significant association between rural financing institution and cassava farmersâ income (?Â²=0.014, p=6). Also 57.8% of the respondents affirmed that the benefits received from the financial institution has a high effects on their standard of living which is affirmed by 43.3% of the respondents who agreed that their monthly income has increased as a result of the accessibility to fund. From the result, 53.3% of the respondents claimed that the high interest rate charged by the institution was the major challenge and 47.8% of the respondents affirmed that the Interest rate should be affordable as this will enhance accessibility of credits.