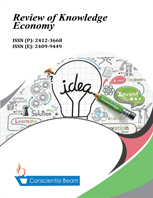 PDF Download  Access Available XML PubMed
Clainos Chidoko , Innocent Sachirarwe (2015). An Analysis of the Impact of Investment on Economic Growth in Zimbabwe. Review of Knowledge Economy, 2(2): 93-98. DOI: 10.18488/journal.67/2015.2.2/67.2.93.98
The study seeks to find out the impact of investment on economic growth from 1980 to 2013. The model used is a linear function. It has been discovered that investment positively affect economic growth in Zimbabwe. It is recommended that the investment authorities should check and monitor the magnitude of the contribution made by investment in Zimbabwe to adequately provide investment incentives to those with the resources to do so.

Contribution/ Originality
This study is one of very few studies which have investigated the impact of investment on economic growth in Zimbabwe spanning a longer period from 1980 to 2013. The study utilised private investment, government investment and foreign direct investment as the main components of investment in the study.

PDF Download  Access Available XML PubMed
Kiggundu Musoke Muhammad , Nicholas Itaaga (2015). Equity Implications of the Universal Primary Education Funding Mechanisms in Uganda. Review of Knowledge Economy, 2(2): 80-92. DOI: 10.18488/journal.67/2015.2.2/67.2.80.92
The study sought to establish whether or not the way Universal Primary Education (UPE) is funded in Uganda is equitable among the different socioeconomic groups, gender, religions and disability. This was based on the view that if the expenditure on education is to benefit the entire society, it must be equitably distributed. Furthermore, specific groups have special requirements that need specific attention. The study adopted a cross-sectional survey design and was majorly qualitative. Key stakeholders interviewed included officials at the Ministry of Education and Sports headquarters, District Education Officials, head teachers, teachers, parents, pupils, and opinion leaders in ten (10) districts in Uganda. The study findings revealed that although some elements of equity were evident, there were no deliberate efforts by the financiers of the UPE program to ensure equity. The study also revealed measures like increased funding, sensitization of key stakeholders, linkages between sectors and needs assessment for appropriate intervention in order to ensure equity in funding. The study recommended that the Government of Uganda and other stakeholders must put in place deliberate provisions to ensure equitable funding of the UPE program.
NB: The national currency in Uganda is the Uganda Shilling (Shs.) and the exchange rate at the time of conducting the study was 1US$ = 2,650 Shs.


Contribution/ Originality
The paperâs primary contribution is the finding that although Universal Primary Education in Uganda is public funded it is not equitably distributed among identified groups like the male versus females, the rich and the poor, various religious groups; and funding bodies have not taken deliberate steps to ensure equity.

PDF Download  Access Available XML PubMed
Tsegaye Tadesse (2015). Introduction to the Application of Organic Polymers for Photovoltaic Devices Organic Electronics Approach: Critical Review. Review of Knowledge Economy, 2(2): 65-79. DOI: 10.18488/journal.67/2015.2.2/67.2.65.79
Photovoltaic effect is the emergence of a voltage between electrodes attached to a solid or liquid system up on shining light on to this system. Conjugated polymer is a molecular entity whose structure is represented as a system of alternating single and double bonds which give rise to their semi-conductor properties. Conjugated polymers are used for photovoltaic devices because, Intrinsically stable up on photoexcitation with visible light, High absorption cross-section for photon harvesting, Tunable band gap with in the entire visible spectral range and High yield of charge generation when mixed with electron acceptor materials. The important physical process in the energy conversion process that take place in polymers for photovoltaic cells are; Absorption of a photon of light by photoactive material and generation of excitons, diffusion of excitons in conjugated polymers, dissociation of charge carriers (electron-hole pair) at the donor-acceptor interface in to free carriers, transport of free carriers towards the electrodes, and extraction of the charge carriers at the respective electrode interfaces. The efficiency of converting solar to electrical energy by a solar cell depends on the band gap of the light absorbing semiconductor. Band gap (Eg) is the difference in energy between the HOMO and LUMO and there by the maximum amount of energy required for an excitation or is the energy difference between the edges of the conduction band and valence band. The power conversion efficiency is a function of band gap. For device architectures of conjugated polymer based photovoltaic cells; there are three types Single layer photovoltaic cell, Bilayer hetero junction photovoltaic cell and Bulk hetero junction Photovoltaic cell.

Contribution/ Originality
The paperâs primary contribution is finding that introducing to the application of organic polymers for photovoltaic devices, that is the application of conjugated organic polymers in electronics or the relation between organic chemistry and electronics which in turn contributes to the investigation of new materials for environmentally friend renewable energy.

PDF Download  Access Available XML PubMed
Olayiwola O. Olaniyi (2015). Projection and Resources Adjustment in Cassava Production in Oyo State, Nigeria. Review of Knowledge Economy, 2(2): 54-64. DOI: 10.18488/journal.67/2015.2.2/67.2.54.64
Projection was made by the use of ARIMA model, contribution of area and yield towards cassava production was done by decomposition analysis and adjustment in cropping pattern was estimated by calculating index level. Forecast result showed that maximum value of area is 843.0 thousand hectares which would be expected in 2013-14 while minimum value is 826.0 thousand hectares which is likely to occur by the year 2025-26. Production forecast revealed maximum value of 1407.0 thousand tons which would be expected by 2025-26 and the minimum value of 1181.0 thousand tons in 2012-13.